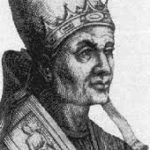 Pope Benedict VIII was the 143rd pope and chosen after the short reign of antipope Gregory VI. He was Italian and ruled as pope during the 11th century. This article looks at his life as pope and the time before.

Before becoming pope, Benedict VIII was a young man born into a noble family. Known as the counts of Tusculum, they lived in Latium and controlled much of that area. He used the name Theophylactus and also Teofilatto di Tuscolo, which was his personal name. The pope received his first appointment in 1001 and became the Cardinal Bishop of Porto. That same year, he became a full cardinal. He spent much of his life working there before becoming pope.

Though chosen as the next pope in May of 1012, Benedict VIII did not take the throne for several months due to opposition from Gregory VI. Gregory VI used force and threats to make the real pope leave Rome. He would then take the throne as an antipope and reign until December of the year. Henry II of Germany stepped in later in the year and helped restore Benedict VIII to his rightful position. Gregory VI visited Germany and begged the ruler to side with him. Henry II instead stripped Gregory VI of his position and gave the throne back to Benedict VIII.

Pope Benedict VIII became known for the support he gave to the Normans. He felt that they were better for Rome than the Saracens who were quite violent in their efforts to take part of the Papal States. In honor of the work done by his predecessors, the pope held a synod to speak out against simony and the action of buying religious titles for money. The reformation efforts that he led brought new rules to the Church and gained support from abbeys across the Papal States. Pope Benedict VIII sided with the Peace and Truce of God movement and spoke in favor of it not long before he passed away.

*Pope Benedict VIII was born circa 980 in Rome.
*His family name was noble and gave him the name Theophylactus.
*He died in Rome on April 9, 1024.
*After the pope died of natural causes, the Church had him buried in the original St. Peter’s Basilica.
*His papacy began on May 18, 1012.
*The papacy of Benedict VIII ended with his death on April 9, 1024.
*Pope John XIX became the pope after the next election.

*Due to his noble roots, family tree records are available. These records show that Pope Benedict VIII was related to four popes who came before him: Sergius III, John XI, John XII and Benedict VII. Pope Benedict IX is also a familial relation.
*Though he was pope for 11 years and 327 days, he spent more than six months living outside of Rome. Following threats from Gregory VI, he traveled to Germany and other areas. Benedict VIII did not officially take the throne until the end of his first year.
*Not only did Benedict VIII face opposition from Gregory VI, he also faced opposition from a small and loyal group who sided with the antipope. He was so grateful to Henry II for helping him get back to Rome that he later named him the Holy Roman Emperor.
*Benedict VIII was close friends with Odilo of Cluny who would later become a saint.
*Sixteen popes in history chose the name Benedict upon their election or naming. Benedict VIII was the eighth and one of the few who did not have a similar personal name.