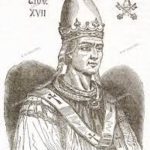 Pope John XVII served as the 140th leader of the Catholic Church. His papacy was short, lasting less than six months. His legacy is not as favorable as many other popes. He was heavily influenced by powerful Romans, being viewed as a puppet to one noble family.

Born Giovanni Siccone, the future pope John XVII did not join the Church right away. He lived in Biveretica, which was a region of Rome. Before his career with the Church started, Giovanni got married and three sons.

The election of Pope John XVII occurred in May of 1003. He was nominated by Crescentius III. Crescentius III was part of a very powerful noble family. The family had a lot of influence in Rome. They even led opposition forces against the Holy Roman Emperor and elected Antipopes.

Pope John XVII didn’t have much say during his papacy. He was considered to be a puppet for Crescentius. The only major accomplishments he had were approving missions to evangelize the Slavs. Other than that, Crescentius III had most of the control.