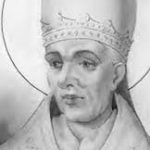 John III was the 61st Pope to hold the position. He served as pope for well over a decade. His papacy was marked by war and uncertainty. Many of the events during his leadership were out of his control. But, Pope John III took action to protect the Church and the country.

Like may Popes of this era, not much is known about John III’s early life. It’s believed that he was born around the year 520 AD. He was born as Catelinus. From the little historical records available, it’s been established that he was born in Rome to a relatively distinguished family.

His father, Anastasius, was a high-ranking member of the Roman Senate. Thus, his family was quite influential in Rome.

Pope John III was officially elected and consecrated as Pope on July 17th, 561. There are several notable events that occurred during his papacy. The biggest is the invasion of Italy. The country was invaded by Lombards, which were Germanic people living North of Italy. Lombards reintroduced Arian belief to Italy, which was largely eradicated prior to the Pope’s reign.

The invasion started in 568 and wreaked havoc throughout the country. Before the Lombards reached Ravenna in the south, Pope John III took it upon himself to seek help from the Naples governor Narses. Ravenna’s governor was virtually powerless.

The Pope begged Narses to go to Ravenna and take control of the invasion, which he did. Unfortunately, Narses was hated by those in Ravenna. As a result, many grew to hate Pope John III for bringing Narses to Ravenna.

To avoid conflict, John III retreated to catacombs about two miles outside of the city. There, he hid from the public while still completing his duties as Pope. He remained in the catacombs until the death of Narses in 573. He returned to the Lateran Palace but dies about a year later, ending his papacy.